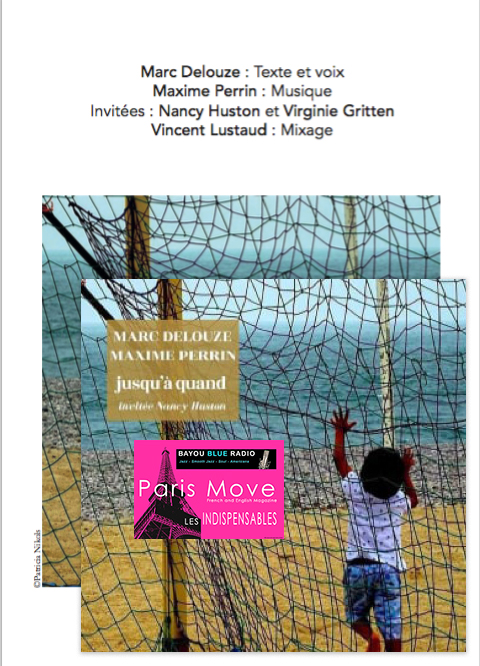 Poetry took hold of our phone, when we heard a voice (Maxime Perrin) from the other end, asking: “Do you think Ilene would like to record a little text for a friend’s poetry project?”
Me: “Don’t move, I’ll see…”
Ilene: “Okay”
It didn’t take any longer than that. Maxime explained the principle of the “post-it”. This is, first of all, a show, based on the texts of Marc Delouze. We fall head-first into a vat of art – spoken word and musical – with Maxime Perrin pulling out all the stops, arranging and accompanying in the right places, in the right way.
The texts exist in an alternate universe, words compressed in a César-like manner (RE the sculptor from Marseille); as if Paul Auster were extending a hand to Léo Ferré.
Nancy Huston and Virginie Gritten interpret, proposing atmospheres… sounding, resounding under the voice of Marc Delouze and the delicate reading of his words… Until when? A question that does not come to mind, so absorbed we are in this work, remarkably mixed by Vincent Loustaud.
And there are other guests, friends of friends, gathered together. On the musical side, guitarist Olivier Cahours, Michel Marin on saxophone and guitar, Jonathan Mauch on saxophone, trumpet, keyboard; and last but not least, clarinetist Samuel Thézé. The vocal talents of the “post-its” behind the main “post-its” mentioned above also include artists, singers, musicians… Taira Boreée, Clémentine Decouture, Ilene Martinez, Tamari Tchabukaidze, Tiziana Valentini, Sou Alam, Olivier Cahours, Jérôme Fouquet, Julien Giustiani, Malek Khemiri, Damien Luce, Matthieu Pirioux, Fréderic Renaud, David Seigneur, Mat’Stora.
Art attracts art, no limits. Take the time to listen, dream, hear one another other, poetize… in the Moment!
The release of this poetic and musical UFO is scheduled for late October.
To order the book and the CD, contact Marc Delouze directly via his Facebook page, here
The editorial staffs of Paris-Move and Bayou Blue News, bent over the cradle of the poet, classify in the series of “Indispensables” this work of art, this rare work, which deserves your attention…