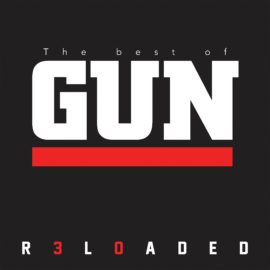 Side A
1. Don’t Say It’s Over
2. Better Days
3. Break the Silence
4. Higher Ground
5. Something Worthwhile
6. Crazy You
7. Take Me Down
8. Steal Your Fire
9. Favourite Pleasures
10.Taking On The World

Billy Sloan a demandé au groupe de vous présenter (et donc en anglais) ce nouvel album:
“The new album by GUN, is a real declaration of intent. GUN are looking to the road ahead. To new challenges. Unfulfilled ambitions.
While the album is a celebration of the band’s illustrious past, it also forcibly underlines that their focus is fixed firmly on the future. There’s a real feeling of optimism and creativity…of so much more to be achieved.
The two-record set celebrates the 30thAnniversary of ‘Taking On The World’, the 1989 debut album by the band from Glasgow, Scotland.
Disc 1, is a collection of 10 singles spanning a 28-year period from their first chart hit Better Days in 1989 to Favourite Pleasures in 2017. It includes key GUN tracks such as ‘Steal Your Fire’ (1992) and ‘Don’t Say It’s Over’ (1994).
“R3L0ADED is a collection of our best singles. We wrote a bunch of songs – the best we could do and had no idea if they’d be successful or if people would connect with them.” recalls GUN guitarist Giuliano “Jools” Gizzi. “They are the soundtrack to a lot of good times and bad. Now, people come up to us to say how these songs have touched them or made an impact, however small, in their lives. In 1989, we WERE taking on the world. We still are.”
GUN’s critically acclaimed debut was released on July 5, 1989, on A & M Records. Who could have predicted it would be the foundation of a collection of seven successful albums and eight hit singles?
“Taking On The World really put us on the map. Thirty years ago, our dream was simply to sign a record deal, release an album and maybe go on tour, no more than that,” admits GUN singer Dante Gizzi. “So it’s great to recognise something which means so much to us, and also to the people who have stayed with us over the years.
R3L0ADED features singles taken from all seven GUN albums:
Taking On The World (1989), Gallus (1992), Swagger (1994), 0141 632 6326 (1997), Break The Silence (2012), Frantic (2015) & Favourite Pleasures (2017)
Disc 2, is a collection of cover songs, which includes Word Up by Cameo (1986), for which the band won the prestigious MTV Europe Music Award for Best Cover. The band have recorded new versions of Every 1’s A Winner by Hot Chocolate (1978), (You Gotta) Fight For Your Right (To Party) by The Beastie Boys (1986), Union City Blue by Blondie (1979), Rock The Casbah by The Clash (1982), Everybody Knows by Dixie Chicks (2006), Diamonds by Rihanna (2012) and Take Me To Church by Hozier (2013). Firm proof GUN can also pull some real musical aces from the pack are the inclusion of the classic Superstition by Stevie Wonder (1972) and Success by Iggy Pop (1977).
“These tracks are our favourite songs by acts we’ve grown up with. But we tried not to pick the obvious ones” reveals Jools. “Our aim was to make heavy rock versions of these great songs. It’s what we do. It’s become one of our strengths both live and in the studio.”
Dante continues “There are many people out there who still want to hear GUN… We have an incredibly loyal fan base, so we owe it to them – as well as ourselves – to keep shooting for goal. Everything is a challenge or a pressure … but it’s a good challenge or a good pressure. We’ve never had it any other way. You always want to march on. But the feeling is that there is still so much more to be done. We’re far from finished. R3L0ADED is just the beginning … the start of a new chapter.”
Written by Billy Sloan