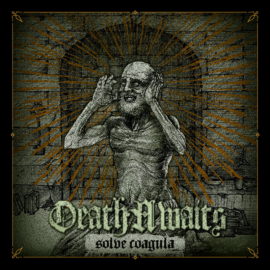 “Solve coagula”, the brand new album of French metal band DEATHAWAITS is officially out April 14th via Sliptrick Records !
You can find it on itunes, amazon, deezer and Spotify, but you can also get your physical copy and the exclusive merch here, on the official web site of the band : DEATHAWAITS

“Solve Coagula”, the third opus from French band DEATHAWAITS is a powerful mix of diverse influences like Thrash, Death or even Hardcore. Darker and more powerful than their last album, every track of “Solve Coagula” invites you to enter various tortured universes filled with doubts, questioning and darkness directly from the minds of the musicians.
The composition of the album took a important turn with the participation of Jordan (arrived in 2014 as guitarist) who put forward a more direct, more melodic but also more technical aspect to the music. All this without losing the dark and brutal aspect that defines the DEATHAWAITS style.

The band took a further step forward due to the collaboration with the Vamacara Studio in Clisson ! “Solve Coagula” is a must for fans of Benighted, Dying Fetus, Slayer, Sepultura…
.
“Solve Coagula” – Released April 14th 2017 on Sliptrick Records.

The album was mixed and produced at the French studio Vamacara.