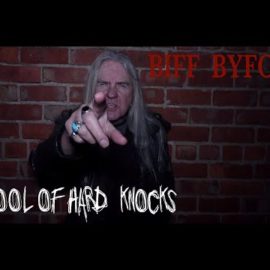 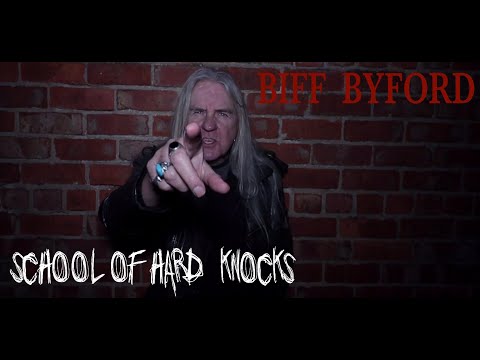 “The title track to the album is basically biographical about my early years…” says Biff. “Have a listen to the lyrics – hope you all like it!”

With his roots firmly in The North of England, Biff has earned the right to be considered The Heavy Metal Bard Of The North and his debut album reflects the man and his personality, his loves and his musical versatility.

School Of Hard Knocks fulfils Biff Byford’s long-standing wish to explore rock ‘n’ roll a little more. The album is a personal journey highlighting his life and his passionate interests, from the history of the Middle Ages to growing up in the industrial North. A classic, masterfully constructed old-school British hard rock album, School Of Hard Knocks embraces a variety of musical genres and includes the Yorkshire folk classic Scarborough Fair, famously covered by Simon and Garfunkel. Byford and Fredrik Åkesson’s arrangement breathes new life into the legendary song.

Biff says: “With this album I’m singing about my past, of course, and about things I like, but mostly I wanted it to reflect me, my personality and my life.”

As a teenager Biff played bass for a number of groups in the Barnsley area while working at a colliery during the day. One of the bands included guitarist Paul Quinn with whom Biff would form Saxon. With Biff now focusing on lead vocals, Saxon released their eponymous debut album in 1979 becoming one of the new wave of British heavy metal bands.

Ever popular in Europe, and particularly in Germany, Saxon continued to be at the forefront of the British heavy metal scene and returned to the UK charts with their 2007 album The Inner Sanctum. Saxon’s 2018 album Thunderbolt was their first to reach the Top 30 album chart in 30 years and became their highest charting album in Germany and Switzerland reaching the Top 10 in both countries.

Photos of Biff Byford Live are under copyright: © Jacky Moutaillier